A large-scale genomic study has uncovered new genetic variations associated with multiple sclerosis (MS), findings that suggest a possible link between MS and other autoimmune diseases. The study, led by an international consortium of clinical scientists and genomics experts, is the first comprehensive study investigating the genetic basis of MS. Findings appear in the July 29 online edition of the New England Journal of Medicine.

END_OF_DOCUMENT_TOKEN_TO_BE_REPLACED

Researchers at the University of Chicago have found an unsuspected link between the immune system and high plasma lipid levels (cholesterol and triglycerides in the blood) in mice. The finding could lead to new ways to reduce the risk of heart disease by lowering elevated lipid levels.
END_OF_DOCUMENT_TOKEN_TO_BE_REPLACED

A therapy that includes stem cell transplantation induced extended insulin independence in patients with type 1 diabetes mellitus, according to a preliminary study in the April 11 issue of JAMA.
END_OF_DOCUMENT_TOKEN_TO_BE_REPLACED

Researchers at Stanford University have added one more trick to carbon nanotubes’ repertoire of accomplishments: a way to fight the human immunodeficiency virus (HIV). Chemistry professor Hongjie Dai and his colleagues have used carbon nanotubes to transport RNA into human white blood cells that defend the body from disease, making the cells less susceptible to HIV attack.

In a paper now online in the journal Angewandte Chemie, Dai and his colleagues describe attaching RNA to carbon nanotubes, which enter T cells and deliver the RNA. When the researchers placed T cells in a solution of the carbon nanotube-RNA complex, receptor proteins on the cell surfaces went down by 80 percent. Carbon nanotubes are known to enter many different types of human cells, although researchers don’t understand exactly how they do it. Some experts suspect that because of their long, thin shape, nanotubes enter cells much as a needle passes through skin.

Read rest of the story on Technology Review site

When a cell has to destroy any of its organelles or protein aggregates, it envelops them in a membrane, forming an autophagosome, and then moves them to another compartment, the lysosome, for digestion. Two years ago, Rockefeller University assistant professor Christian Münz showed that this process, called autophagy, sensitizes cells for recognition by the immune system’s helper T cells. But he didn’t know how often this pathway is used or how efficient it is. Now, a new study published online today in the journal Immunity goes a long way toward addressing these questions and shows that the pathway is so common that it could be a valuable new way of boosting vaccine efficacy. 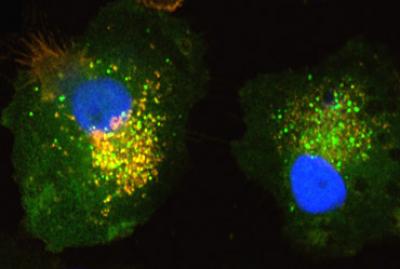 END_OF_DOCUMENT_TOKEN_TO_BE_REPLACED

The ebb and flow of such autoimmune diseases as multiple sclerosis, lupus and rheumatoid arthritis has long been a perplexing mystery. But new findings from the Stanford University School of Medicine bring scientists closer to solving the puzzle, identifying a molecule that appears to play a central role in relapses.
END_OF_DOCUMENT_TOKEN_TO_BE_REPLACED

Immunologists at the Kimmel Cancer Center at Thomas Jefferson University in Philadelphia have used nanotechnology to create a novel “biosensor” to solve in part a perplexing problem in immunology: how immune system cells called killer T-cells hunt down invading viruses.

They found that surprisingly little virus can turn on the killer T-cells, thanks to some complicated communication among so-called “antigen presenting” proteins that recognize and attach to the virus, in turn, making it visible to the immune system. T-cell receptors then “see” the virus, activating the T-cells.
END_OF_DOCUMENT_TOKEN_TO_BE_REPLACED

finding by University of Pennsylvania School of Medicine researchers about how immune cells “decide” to become active or inactive may have applications in fighting cancerous tumors, autoimmune diseases, and organ transplant rejection. Pathology and Laboratory Medicine Professor Gary A. Koretzky, MD, PhD, director of the Signal Transduction Program at Penn’s Abramson Family Cancer Research Institute describes, in the current issue of Nature Immunology, one way in which T cells may develop tolerance to host cells and proteins. Koretzky and colleagues found that small fatty acids called diacylglycerols (DAGs), and the enzymes that metabolize them, are critical players in the molecular pathway that leads to activity versus inactivity.
END_OF_DOCUMENT_TOKEN_TO_BE_REPLACED

A team of researchers has genetically engineered normal immune cells to become specialized tumor fighters, demonstrating for the first time that these engineered cells can persist in the body and shrink large tumors in humans.
END_OF_DOCUMENT_TOKEN_TO_BE_REPLACED

Researchers from the UCLA AIDS Institute and the Institute for Stem Cell Biology and Medicine have demonstrated for the first time that human embryonic stem cells can be genetically manipulated and coaxed to develop into mature T-cells, raising hopes for a gene therapy to combat AIDS.

The study, to be published the week of July 3 in the online edition of the Proceedings of the National Academy of Sciences, found that it is possible to convert human embryonic stem cells into blood-forming stem cells that in turn can differentiate into the helper T-cells that HIV specifically targets. T-cells are one of the body’s main defenses against disease.
END_OF_DOCUMENT_TOKEN_TO_BE_REPLACED