Researchers at the Picower Institute for Learning and Memory at MIT report in the Jan. 24 online edition of Science that they have created a way to see, for the first time, the effect of blocking and unblocking a single neural circuit in a living animal.

This revolutionary method allowed Susumu Tonegawa, Picower Professor of Biology and Neuroscience, and colleagues to see how bypassing a major memory-forming circuit in the brain affected learning and memory in mice.

END_OF_DOCUMENT_TOKEN_TO_BE_REPLACED

Practice makes perfect — or at least that’s what we’re told as we struggle through endless rounds of multiplication tables, goal kicks and piano scales — and it seems, based on the personal experience of many, to be true. That’s why neuroscientists have been perplexed by data showing that at the level of individual synapses, or connections between neurons, increased, repetitive stimulation might actually reverse early gains in synaptic strength. Now, neuroscientists from Carnegie Mellon University and the Max Planck Institute have discovered the mechanism that resolves this apparent paradox. The findings are published in the Jan. 4 issue of Science.

END_OF_DOCUMENT_TOKEN_TO_BE_REPLACED

Scientists at The University of Arizona have added another piece of the puzzle of how the brain processes memory.

Bruce McNaughton, a professor of psychology and physiology, and his colleague David Euston have shown that, during sleep, the reactivated memories of real-time experiences are processed within the brain at a higher rate of speed. That rate can be as much as six or seven times faster, and what McNaughton calls “thought speed.”
END_OF_DOCUMENT_TOKEN_TO_BE_REPLACED

After constructing genes from random bits of DNA, researchers in the lab of Professor Pamela Silver, a faculty member in Harvard Medical School’s Department of Systems Biology, not only reconstructed the dynamics of memory, but also created a mathematical model that predicted how such a memory “device” might work.

END_OF_DOCUMENT_TOKEN_TO_BE_REPLACED

A new study by NYU Medical Center researchers shows for the first time that the immune system can combat the pathological form of tau protein, a key protein implicated in Alzheimer’s disease. The researchers, led by Einar Sigurdsson Ph.D. at New York University School of Medicine, created a vaccine in mice that suppresses aggregates of tau. The protein accumulates into harmful tangles in the memory center of the brains of Alzheimer’s patients.

The vaccine successfully slowed the deterioration of motor abilities produced by excessive amounts of tau in the central nervous system of mice, according to the study published in the August 22, 2007 issue of the Journal of Neuroscience. Dr. Sigurdsson plans to conduct follow-up studies using mice that slowly develop tangles and cognitive impairments without movement problems.

END_OF_DOCUMENT_TOKEN_TO_BE_REPLACED

What happens in our brains when we learn and remember” Are memories recorded in a stable physical change, like writing an inscription permanently on a clay tablet” Prof. Yadin Dudai, Head of the Weizmann Institute’s Neurobiology Department, and his colleagues are challenging that view. They recently discovered that the process of storing long-term memories is much more dynamic, involving a miniature molecular machine that must run constantly to keep memories going. They also found that jamming the machine briefly can erase long-term memories. Their findings, which appeared today in the journal Science, may pave the way to future treatments for memory problems.

END_OF_DOCUMENT_TOKEN_TO_BE_REPLACED

MIT neuroscientists exploring how memory formation differs between children and adults have found that although the two groups have much in common, maturity brings richer memories.In the August 5 advance online edition of Nature Neuroscience, the MIT team reports that children rival adults in forming basic memories, but adults do better at remembering the rich, contextual details of that information. The MIT study provides new insights into how children learn that are not only theoretically important, but could also inform practical learning in everyday settings. END_OF_DOCUMENT_TOKEN_TO_BE_REPLACED

“This finding is an important advance because it identifies a single natural chemical with memory-enhancing effects, suggesting that it may be possible to optimize brain function by combining exercise and dietary supplementation,” says Mark Mattson, PhD, at the National Institute on Aging.
END_OF_DOCUMENT_TOKEN_TO_BE_REPLACED

Mice whose brains had lost a large number of neurons due to neurodegeneration regained long-term memories and the ability to learn after their surroundings were enriched with toys and other sensory stimuli, according to new studies by Howard Hughes Medical Institute researchers. The scientists were able to achieve the same results when they treated the mice with a specific type of drug that encourages neuronal growth. 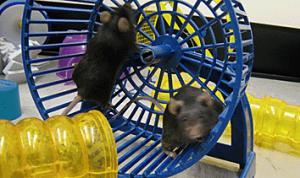 END_OF_DOCUMENT_TOKEN_TO_BE_REPLACED

Memorizing a series of facts is one thing, understanding the big picture is quite another. Now a new study demonstrates that relational memory — the ability to make logical “big picture” inferences from disparate pieces of information – is dependent on taking a break from studies and learning, and even more important, getting a good night’s sleep.
END_OF_DOCUMENT_TOKEN_TO_BE_REPLACED

New research from Columbia University Medical Center may explain why people who are able to easily and accurately recall historical dates or long-ago events, may have a harder time with word recall or remembering the day’s current events. They may have too much memory – making it harder to filter out information and increasing the time it takes for new short-term memories to be processed and stored.
END_OF_DOCUMENT_TOKEN_TO_BE_REPLACED

A special cocoa made to retain naturally occurring compounds called flavanols may have the potential to help maintain healthy brain function and chart the course for future research that could lead to new solutions for preventing cognitive decline and dementia, according to a panel of scientists who presented new data at the annual meeting of the American Association for the Advancement of Science (AAAS).

Several studies suggest that consumption of a special cocoa made to be rich in flavanols, a naturally occurring nutrient abundant in fresh cocoa, may improve blood vessel function. Now, scientists believe the potential blood flow benefits associated with consumption of this flavanol-rich cocoa may extend to the brain — which could have important implications for learning and memory.
END_OF_DOCUMENT_TOKEN_TO_BE_REPLACED

Human memory, the ability to recall vivid mental images of past experiences, has been studied extensively for more than a hundred years. But until recently, there’s been surprisingly little research into cognitive processes underlying another form of mental time travel — the ability to clearly imagine or “see” oneself participating in a future event.

Now, researchers from Washington University in St. Louis have used advanced brain imaging techniques to show that remembering the past and envisioning the future may go hand-in-hand, with each process sparking strikingly similar patterns of activity within precisely the same broad network of brain regions.
END_OF_DOCUMENT_TOKEN_TO_BE_REPLACED

A gene variation that helps people live to a ripe old age also appears to preserve memory and thinking power, US work suggests. The “longevity” gene alters the size of fatty cholesterol particles in the blood, making them bigger than normal.

This stops them causing the fatty build up in blood vessels that is linked with brain impairment, and deadly strokes and heart attacks, Neurology reports.
END_OF_DOCUMENT_TOKEN_TO_BE_REPLACED

A region of the human brain that scientists believe is critical to human intellectual abilities surprisingly functions much like a digital computer, according to psychology Professor Randall O’Reilly of the University of Colorado at Boulder.

The finding could help researchers better understand the functioning of human intelligence.
END_OF_DOCUMENT_TOKEN_TO_BE_REPLACED

A diet containing curry may help protect the aging brain, according a study of elderly Asians in which increased curry consumption was associated with better cognitive performance on standard tests.

Mothers have long exhorted their children to eat their fruit and vegetables. But once kids are beyond mom’s watchful eye, the hated greens often go the way of Barbie dolls and power rangers. Now, there’s another reason to reach for colorful fruits past adolescence.

Fisetin, a naturally occurring flavonoid commonly found in strawberries and other fruits and vegetables, stimulates signaling pathways that enhance long-term memory, report researchers at the Salk Institute for Biological Studies in this week’s Online Early Edition of the Proceedings of the National Academy of Sciences.
END_OF_DOCUMENT_TOKEN_TO_BE_REPLACED

Researchers at the Translational Genomics Research Institute (TGen) today announced the discovery of a gene that plays a significant role in memory performance in humans. The findings, reported by TGen and research colleagues at the University of Zurich in Switzerland, Banner Alzheimer’s Institute, and Mayo Clinic Scottsdale, appear in the October 20 issue of Science. The study details how researchers associated memory performance with a gene called Kibra in over 1,000 individuals –both young and old– from Switzerland and Arizona. This study is the first to describe scanning the human genetic blueprint at over 500,000 positions to identify cognitive differences between humans.
END_OF_DOCUMENT_TOKEN_TO_BE_REPLACED

The levels of a chemical released by the brain determine how detailed a memory will later be, according to researchers at UC Irvine.

The neurotransmitter acetylcholine, a brain chemical already established as being crucial for learning and memory, appears to be the key to adding details to a memory. In a study with rats, Norman Weinberger, research professor of neurobiology and behavior, and colleagues determined that a higher level of acetylcholine during a learning task correlated with more details of the experience being remembered. The results are the first to tie levels of acetylcholine to memory specificity and could have implications in the study and treatment of memory-related disorders.
END_OF_DOCUMENT_TOKEN_TO_BE_REPLACED

If you think that your daily cups of coffee only provide you with alertness after you wake up or during the day, think again. Long-term intake of caffeine, the major constituent in coffee and tea, has been shown to reduce the risk of Alzheimer’s in mice that develop the disease.

In a study just published on-line in the Journal Neuroscience, researchers at the Byrd Alzheimer’s Institute in Tampa, Florida, are reporting that caffeine intake equivalent to five cups of coffee a day in humans, protects Alzheimer’s mice against otherwise certain memory impairment and reduces Alzheimer’s pathology in their brains.

END_OF_DOCUMENT_TOKEN_TO_BE_REPLACED

For those who think that apple juice is a kid’s drink, think again. Apples and apple juice may be among the best foods that baby boomers and senior citizens could add to their diet, according to new research that demonstrates how apple products can help boost brain function similar to medication.
END_OF_DOCUMENT_TOKEN_TO_BE_REPLACED

Imagine an Alzheimer's patient receiving a vaccine made of specialized blood cells and then showing a much- improved memory. Also, imagine that vaccine having no side effects and needing to be given only occasionally.

Researchers at the Johnnie B. Byrd, Sr. Alzheimer's Center & Research Institute in Tampa, Florida, have not only imagined these things, they have actually developed such a vaccine that they show reverses memory loss in Alzheimer's mice.
END_OF_DOCUMENT_TOKEN_TO_BE_REPLACED

“This report is the first to demonstrate evidence of enhancements in memory reconsolidation in the brain,” said the senior author, Jane Taylor, associate professor in the Department of Psychiatry. “Understanding these molecular mechanisms may provide critical insights into psychiatric disorders.”
END_OF_DOCUMENT_TOKEN_TO_BE_REPLACED

Harvard University biologists have identified a molecular pathway active in neurons that interacts with RNA to regulate the formation of long-term memory in fruit flies. The same pathway is also found at mammalian synapses, and could eventually present a target for new therapeutics to treat human memory loss.

END_OF_DOCUMENT_TOKEN_TO_BE_REPLACED

The activity of connections among brain cells significantly affects levels of the toxic protein beta-amyloid (Aß) that is a major cause of Alzheimer’s disease (AD), researchers have found. Aß is produced by the cleavage of amyloid precursor protein (APP) within brain cells.

Findings suggest that the kind of mental activity people practice or drugs they might take for depression or anxiety could affect their AD risk or the disease progression.
END_OF_DOCUMENT_TOKEN_TO_BE_REPLACED

Different brain regions working together may coordinate by locking into an oscillation frequency the way a radio tuner locks into a station, report researchers from the Picower Institute for Learning and Memory at MIT. END_OF_DOCUMENT_TOKEN_TO_BE_REPLACED