Scientists seeking to understand the origin of the human mind may want to look to honeybees — not ancestral apes — for at least some of the answers, according to a University of Colorado Boulder archaeologist.

CU-Boulder Research Associate John Hoffecker said there is abundant fossil and archaeological evidence for the evolution of the human mind, including its unique power to create a potentially infinite variety of thoughts expressed in the form of sentences, art and technologies. He attributes the evolving power of the mind to the formation of what he calls the “super-brain,” or collective mind, an event that took place in Africa no later than 75,000 years ago.

Caption: CU-Boulder researcher John Hoffecker, shown here working at a site in Russia dating back 45,000 years, believes there is mounting archaeological evidence for the evolution of a human “super-brain” no later than 75,000 years ago that spurred a modern capacity for novelty and invention. END_OF_DOCUMENT_TOKEN_TO_BE_REPLACED

When ancient retroviruses slipped bits of their DNA into the primate genome millions of years ago, they successfully preserved their own genetic legacy. Today an estimated 8 percent of the human genetic code consists of endogenous retroviruses (ERVs)–the DNA remnants from these so-called “selfish parasites.”

Surprisingly, the infected hosts and their primate descendants also appear to have benefited from this genetic invasion, new evidence suggests. The ancient retroviruses–distant relatives of the human immunodeficiency virus (HIV)–helped a gene called p53 become an important “master gene regulator” in primates, according to a study published this week in the online early edition of Proceedings of the National Academy of Sciences.

END_OF_DOCUMENT_TOKEN_TO_BE_REPLACED

Scientists studying one of nature’s simplest organisms have helped to unravel the structure of a key molecule that controls pain in humans. The findings – published in the top scientific journal Nature – could rapidly advance research into the next generation of painkillers for relief of chronic conditions such as migraine and backache.

END_OF_DOCUMENT_TOKEN_TO_BE_REPLACED

Human resistance to a retrovirus that infected chimpanzees and other nonhuman primates 4 million years ago ironically may be at least partially responsible for the susceptibility of humans to HIV infection today.

“This ancient virus is a battle that humans have already won. Humans are not susceptible to it and have probably been resistant throughout millennia,” said senior author Michael Emerman, Ph.D., a member of the Human Biology and Basic Sciences divisions at the Hutchinson Center. “However, we found that during primate evolution, this innate immunity to one virus may have made us more vulnerable to HIV.”

END_OF_DOCUMENT_TOKEN_TO_BE_REPLACED

Researchers at the Johns Hopkins School of Medicine and their colleagues have found that mice simply expressing a human light receptor in addition to their own can acquire new color vision, a sign that the brain can adapt far more rapidly to new sensory information than anticipated.

This work, appearing March 23 in Science, also suggests that when the first ancestral primate inherited a new type of photoreceptor more than 40 million years ago, it probably experienced immediate color enhancement, which may have allowed this trait to spread quickly.
END_OF_DOCUMENT_TOKEN_TO_BE_REPLACED

A group of European researchers has developed a spinal cord model of the salamander and implemented it in a novel amphibious salamander-like robot. The robot changes its speed and gait in response to simple electrical signals, suggesting that the distributed neural system in the spinal cord holds the key to vertebrates’ complex locomotor capabilities. 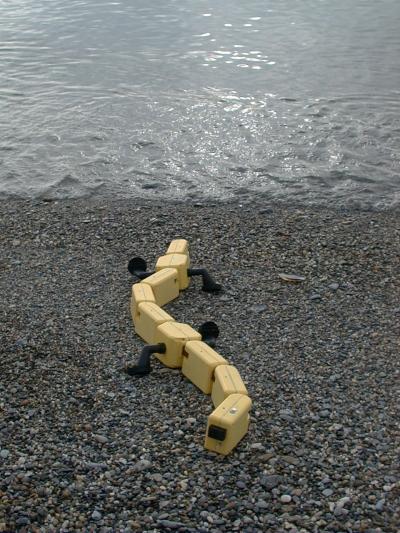 END_OF_DOCUMENT_TOKEN_TO_BE_REPLACED

A study from the University of Chicago has been getting a lot of press attention lately. They found that your chances of living to 100 may depend on how young your mother was when she gave birth to you with chances doubled if mom was under 25. The reports do not give the explanation why.

Dr. Steven Palter, a specialist in Obstetrics and Gynecology and Reproductive Endocrinology and Infertility, has written in his blog docinthemachine about an interesting theory of reproductive aging and human longevity. The findings are based on data presented in recent American Society for Reproductive Medicine meeting by Dr. Keefe of U. Florida on the telemore and its role in reproductive aging.

Read rest of this interesting story at docinthemachine blog.

A Princeton-led research group has discovered an isolated community of bacteria nearly two miles underground that derives all of its energy from the decay of radioactive rocks rather than from sunlight. According to members of the team, the finding suggests life might exist in similarly extreme conditions even on other worlds.
END_OF_DOCUMENT_TOKEN_TO_BE_REPLACED

The virulence characteristic of HIV-1–the virus predominantly responsible for human AIDS–might amount to an accident of evolution, new evidence reveals. A gene function lost during the course of viral evolution predisposed HIV-1 to spur the fatal immune system failures that are the hallmarks of AIDS, researchers report in the June 16, 2006 Cell.

END_OF_DOCUMENT_TOKEN_TO_BE_REPLACED

Scientists have evolved a complex trait in the laboratory — using the pressure of selection to induce tobacco hornworms to evolve the dual trait of turning black or green depending on the temperature during their development. The biologists have also demonstrated the basic hormonal mechanism underlying the evolution of such dual traits.

Their experiments, they said, offer important insight into how complex traits involving many genes can abruptly “blossom” in an organism’s evolution.

END_OF_DOCUMENT_TOKEN_TO_BE_REPLACED

A UC Riverside-led research team has found that as some populations of an organism evolve a longer lifespan, they do so by increasing only that segment of the lifespan that contributes to “fitness” – the relative ability of an individual to contribute offspring to the next generation. Study results appear Dec. 27 in the online edition of the Public Library of Science – Biology.

The study supports the controversial hypothesis that natural selection – the process in nature by which only organisms best adapted to their environment tend to survive and pass on their genetic characters in increasing numbers to succeeding generations – introduces changes in only a specific segment of an organism’s lifespan.

END_OF_DOCUMENT_TOKEN_TO_BE_REPLACED

Evolution has been the foundation and guiding theory of biology since Darwin gave the theory its proper scientific debut in 1859. But Darwin probably never dreamed that researchers in 2005 would still be uncovering new details about the nuts and bolts of his theory — how does evolution actually work in the world of influenza genes and chimpanzee genes and stickleback fish armor? Studies that follow evolution in action claim top honors as the Breakthrough of the Year, named by Science and its publisher AAAS, the nonprofit science society.
END_OF_DOCUMENT_TOKEN_TO_BE_REPLACED