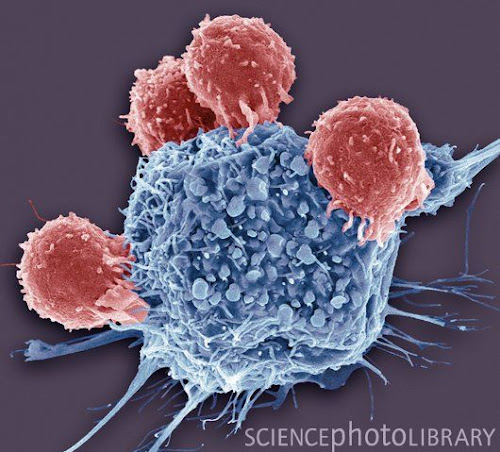 T lymphocytes and cancer cell. Coloured scanning electron micrograph (SEM) of T lymphocyte cells (red) attached to a cancer cell. T lymphocytes are a type of white blood cell that recognise a specific site (antigen) on the surface of cancer cells or pathogens and bind to it. Some T lymphocytes then signal for other immune system cells to eliminate the cell. The genetic changes that cause a cell to become cancerous lead to the presentation of tumour antigens on the cell’s surface. Magnification: x2300 when printed at 10 centimetres wide.

For years, the open science movement has sought to light a fire about the “closed” journal-publication system. In the last few weeks their efforts seemed to have ignited a broader flame, driven mainly, it seems, by the revelation that one of the most resented publishers, Elsevier, was backing the Research Works Act — some tomfoolery I noted in Congress Considers Paywalling Science You Already Paid For, on Jan 6. Now, 24 days later, scientists are pledging by the hundreds to not cooperate with Elsevier in any way — refusing to publish in its journals, referee its papers, or do the editorial work that researchers have been supplying to journals without charge for decades — and the rebellion is repeatedly reaching the pages of the New York Times and Forbes.

Memories in our brains are maintained by connections between neurons called “synapses”. But how do these synapses stay strong and keep memories alive for decades? Neuroscientists at the Stowers Institute for Medical Research have discovered a major clue from a study in fruit flies: Hardy, self-copying clusters or oligomers of a synapse protein are an essential ingredient for the formation of long-term memory.

The finding supports a surprising new theory about memory, and may have a profound impact on explaining other oligomer-linked functions and diseases in the brain, including Alzheimer’s disease and prion diseases.

“Self-sustaining populations of oligomers located at synapses may be the key to the long-term synaptic changes that underlie memory; in fact, our finding hints that oligomers play a wider role in the brain than has been thought,” says Kausik Si, Ph.D., an associate investigator at the Stowers Institute, and senior author of the new study, which is published in the January 27, 2012 online issue of the journal Cell.

END_OF_DOCUMENT_TOKEN_TO_BE_REPLACED

Stressed yeast cells frantically reshuffle their chromosomes in a desperate last bid to find a combination that survives. This “panic” response enables them to rapidly evolve resistance to drugs.

The discovery might also apply to cancer, because cancer cells often have abnormal numbers and arrangements of chromosomes. Understanding one of the mechanisms by which cancers develop resistance to drugs could in turn open up new ways to combat cancer.

The key panic button driving the reshuffling is heat-shock protein 90 (Hsp90), which normally ensures that chromosomes are faithfully copied when cells divide and multiply. When Hsp90 is knocked out, the chromosomes get completely reshuffled. That’s normally a disaster, but in a desperate situation it’s a potential lifeline.

Mice don’t have tails on their backs, and their ribs don’t grow from lumbar vertebrae. And for a good reason. EPFL scientists have discovered the mechanism that determines the shape that many animals take – including humans, blue whales, and insects.

Why don’t our arms grow from the middle of our bodies? The question isn’t as trivial as it appears. Vertebrae, limbs, ribs, tailbone … in only two days, all these elements take their place in the embryo, in the right spot and with the precision of a Swiss watch. Intrigued by the extraordinary reliability of this mechanism, biologists have long wondered how it works. Now, researchers at EPFL (Ecole Polytechnique Fédérale de Lausanne) and the University of Geneva (Unige) have solved the mystery. Their discovery will be published October 13, 2011 in the journal Science.

via From whales to earthworms, the mechanism that gives shape to life.

Scientists working at the Medical Research Council have identified changes in the patterns of sugar molecules that line pre-cancerous cells in the esophagus, a condition called Barrett’s dysplasia, making it much easier to detect and remove these cells before they develop into esophageal cancer. These findings, reported in the journal Nature Medicine, have important implications for patients and may help to monitor their condition and prevent the development of cancer.
END_OF_DOCUMENT_TOKEN_TO_BE_REPLACED

..Human arteries – some smaller than a strand of hair – stiffen as a person ages. This stiffening is a factor in cardiovascular disease, the leading cause of death in the United States, because it contributes to the circulatory complications in disorders such as high blood pressure and diabetes. University of Missouri researchers have now used advanced 3-D microscopic imaging technology to identify and monitor the proteins involved in this stiffening process. These findings could eventually help researchers and physicians understand and treat complications associated with cardiovascular disease.

END_OF_DOCUMENT_TOKEN_TO_BE_REPLACED

Have you ever wondered what a virus sounds like? Or what noise a bacterium makes when it moves between hosts? If the answer is yes, you may soon get your chance to find out, thanks to the development of the world’s tiniest ear. The “nano-ear,” a microscopic particle of gold trapped by a laser beam, can detect sound a million times fainter than the threshold for human hearing. Researchers suggest the work could open up a whole new field of “acoustic microscopy,” in which organisms are studied using the sound they emit.

The concept of the nano-ear began with a 1986 invention known as optical tweezers. The tweezers use a laser beam focused to a point with a lens to grab hold of tiny particles and move them around. They’ve become a standard tool in molecular biology and nanotechnology, helping researchers inject DNA into cells and even manipulate it once inside. Optical tweezers can also be used to measure minuscule forces acting on microscopic particles; once you’ve grabbed hold of your particle with the laser beam, instead of moving it yourself, you simply use a microscope or other suitable monitoring apparatus to watch whether it moves of its own accord. That’s where the nano-ear comes in.

The compound—delta-12-protaglandin J3, or D12-PGJ3—targeted and killed the stem cells of chronic myelogenous leukemia, or CML, in mice, says Sandeep Prabhu, associate professor of immunology and molecular toxicology at Penn State.

The compound is produced from EPA—Eicosapentaenoic Acid—an omega-3 fatty acid found in fish and in fish oil.

“Research in the past on fatty acids has shown the health benefits of fatty acids on cardiovascular system and brain development, particularly in infants, but we have shown that some metabolites of omega-3 have the ability to selectively kill the leukemia-causing stem cells in mice,” says Prabhu. “The important thing is that the mice were completely cured of leukemia with no relapse.”