An international consortium of researchers led by the University of Manchester has cracked the gene code behind a key family of fungi, which includes both the leading cause of death in leukaemia and bone marrow transplant patients and an essential ingredient of soy sauce.

The ‘genome sequences’ or genetic maps for the fungi Aspergillus fumigatus, Aspergillus nidulans and Aspergillus oryzae are published on 22 December in Nature magazine. Despite being from the same fungal family, they have been found to be as genetically different as fish and man. 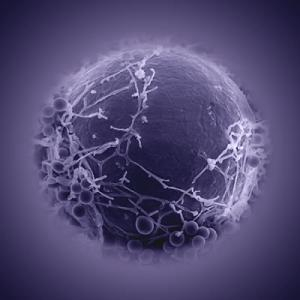 Aspergillus is a very common air-borne fungus, carried all over the world as spores. Although usually harmless, the species Aspergillus fumigatus was identified as a cause of infection as long ago as 1848 and is now the leading infectious cause of death in vulnerable leukaemia and bone marrow transplant patients. Aspergillus nidulans has been a leading experimental system helping to unravel many fundamental cellular processes for the last 50 years, whilst Aspergillus oryzae has been used in the Far East for 2000 years to produce sake (rice wine), miso (soybean paste) and shoyu (soy sauce).

The researchers have found that the three species only display around 68% of the same proteins, a similar percentage to that shared by mammals and fish which diverged 450 million years ago. They also differ considerably in genome size, with Aspergillus oryzae being 31% bigger than Aspergillus fumigatus and 24% bigger than Aspergillus nidulans. Intriguingly, over 30% of the 9,500-14,000 genes identified are new to science and of unknown function and structure.

These results are being reported in three different papers in Nature, and reflect the efforts of an international collaboration of scientists and sequencing centres. The University’s Professor David Denning, who coordinated the project, said: “Fungi (including Aspergillus) play a critical role in the earth’s ecosystem, being responsible for almost all degradation of plant material as well as recycling nitrogen. Aspergillus fumigatus is a major constituent of compost, and mould fungi have been important sources of drugs including penicillin and ciclosporin (for transplantation).

“However, they are something of a Jekyll and Hyde and also produce toxins known as mycotoxins, such as aflatoxin which can cause liver cancer. Aspergillus causes a life-threatening infection for transplant and leukaemic patients, as well as being a major allergen for asthmatics.

“Identifying these genome sequences will transform scientific understanding of why this group of fungi is so lethal and allergenic. The importance of the project in helping develop new drugs and diagnostic tests, and understand and prevent allergies and diseases like pneumonia and sinusitis, cannot be overestimated. The information revealed will also develop our understanding of the biology of composting and mycotoxin production, and provide benefits for many other areas of science and medicine.”

This story has been adapted from a news release issued by University of Manchester.